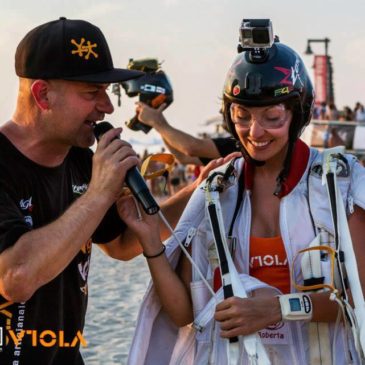 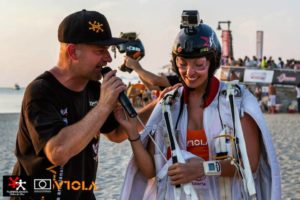 We met Daniele Fraternali of Turbolenza, the most fearless part  of Viola’s World!

Turbolenza is a project born from a great passion for the human flight. The same as for Viola, the philosophy of a reality  dealing  with skydive takes inspiration from avant garde, quality, amusement, adrenaline and dreams… the development of a great passion  becoming a successful brand and a life style. A perfect affinity with Viola’s word.

And on the basis of these similarities Maurizio Arduini founder of Birra Viola and Daniele Fraternali, founder of the Turbolenza world   established a special partnership some years ago and today they are very best friends.

This all started on the beach of Lamparino in Cattolica in 2011, when the School of Skydive in Fano and about 10 skydivers landed on the beach by creating a spectacular and original show. Some years later, Viola also takes part in the format, searched and chosen by Daniele  for its uniqueness.

“ I wished  I could find as a partner a cool product, different from the usual products and Viola seemed to be perfect, I have always linked it to TOP and Turbolenza is born and starts from the top! Therefore it’s a perfect union. We already have the date for the next edition in summer 2017 (July, 23rd) and we will call it, as in the previous years – decided together with Maurizio – the “ Aperitif with snout in the air”. Since few years it has become a unique appointment in Europe, exponentially  grown year after year, thanks to the support of Viola and today it involves more than 30 skydivers among the best in the world. A show like no other, Viola Beer, Music and adrenalin on the beach… not to be missed!”.

Indeed, the “Aperitif with snout in the air” has not to be missed and people knows: each year the  number of spectators are increasing on the beach of Lamparino in Cattolica!

Viola Beer supports Turbolenza also during other important events, as for the Italian Parachuting Championship and the speed freefall style world championship, called also Speed Skydiving, reintroduced by the skydiving school of Fano and promoted by the International Speed Skydiving Association (ISSA). The best athletes from all over the world competing in free fall head down position reaching more than 300 mph!

Daniele Fraternali says: “ there’s no better union with the slogan from which comes up Viola “goes as a Viola” for the sport practiced by the fastest non-motorized athletes in  the world!”.

Daniele Fraternali is the president of the sport club Turbolenza, which owns also a clothing brand and equipment for parachuting, base jumping, paragliding and others: “We have established a Viola Beer branding  bar space, therefore you will breath here really ..Viola air!”

Descover Turbolenza, its athletes, the shop, the events, the news and its philosophy at: www.turbolenza.com